FORMER PRESIDENT OBASANJO, PLEASE DON'T WRITE ME ANY LETTER AT ALL. 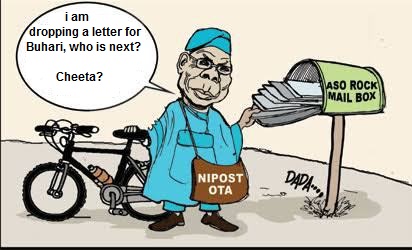 Former President known Obasanjo known as Baba is blessed for being the former Head of State and civilian president, from the history, he is viewed as the baba who has conquered Biafra, the Biafran soldiers surrendered completely to Baba Obasanjo and he brought them all to Lagos State and handed them over to General Gowon after he took over the 3rd Marine Commando and the war that had been fought for two and a half years ended in a few months.

Baba Obasanjo is well known to be fearless and always ready to abolish anybody across Nigeria. Whenever he talks, everyone including his opponents listen. He is still very much relevant even at his old age. He has a skill in writing letters, he uses his pen to settle scores with his targets. His letterhead paper is like bearing his name in upper case letters, OLUSEGUN OBASANJO and his Ibara, Abeokuta, Ogun State residence as his address.

The issues of Obasanjo's letters (culled from D-One Ayekoto)

Baba Obasanjo may have done even more evil than whoever he writes to, but while the former military leader always escapes repercussions, those he admonishes are not always lucky. 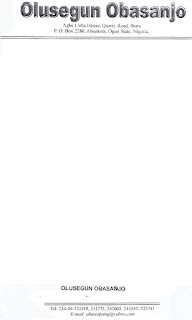 It was not Olusegun Obasanjo’s will really to lead Nigeria, but when Murtala died he was unanimously elected by the military. Obasanjo became the first military head of state in Nigeria (if not Africa) to hand over power to the civilian, his preferred candidate Shehu Shagari, although through some shady elections.

Obasanjo did not spare Shagari when the latter was soaked in mismanagement of the economy. He wrote to him. A few months after, the military smashed the Shagari government.

In 1995 Obasanjo secretly wrote to Abacha describing the latter as a Stone Age dictator. Moreover he refused to settle Abacha’s rift with Mandela, and this caused him trouble. He was almost killed. However, after Obasanjo’s death sentence had been converted into the prison term, he wrote another letter to Abacha, titled No Condition Is Permanent, in which he said: "I was the head of state yesterday, today I'm in jail. You're the head of state today, tomorrow your condition may be worse than mine.”

Indeed, Abacha's future was worse as he ended up in the grave!

Obasanjo did not write to himself while in power; instead, he wrote to his deputy, Atiku Abubakar. Atiku has become a shadow of his pre-1999 self since then.

It wasn't clear whether he wrote to Yar’adua, a terminally ill former Kastina governor he had himself imposed on Nigeria, but he came out and asked him to resign in public!

Obasanjo is the one who hates conspiratorial diplomacy and boring protocol; no former head of state does it better.

Although Obasanjo imposed the ineffectual buffon, Goodluck Jonathan, whose damage to Nigeria is enormous, when corruption under Jonathan had reached such a level that Satan was afraid of Nigeria, and even Mobutu in his grave described Jonathan as corrupt (so I heard), Obasanjo didn't spare his imposed devil - he wrote him a letter titled Before It Is Too Late. However, it had actually been late long before the letter was written. Today Jonathan has become a sorrowful history; many Nigerians don't know why such evil has befallen us as a nation. Jonathan was a monumental disaster.

Obasanjo's latest letter was written to the Saraki-led National Assembly (NASS). The NASS whose leadership was brought about by forgery and deceit of other members. The NASS where the Senate president is a former robbery suspect, the deputy Senate president - a forger, and the minority leader has recently attempted to transfer a huge amount of dollars to a safer place. What a NASS?

Their reply is the usual one Obasanjo has got to every letter he has written to the public officers: insults, denials and mockery. Unfortunately, anyone he writes is always destroyed thereafter, especially after their expected reply.

Well, at the moment, the question is where will Obasanjo’s latest letter take Saraki and Speaker Yakubu Dogara to? I also hear that Baba Obasanjo wants to write a letter to President Buhari. Well, i don't really care. Therefore i am writing a letter to Baba Obasanjo personally.