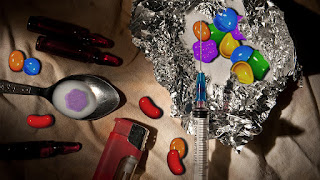 I don’t understand. It’s just Bejeweled. With candy. What’s the big deal? Innocent words from a better time. A better place. Before I’d ever made that deplorable journey to the App Store and downloaded… it is Candy Crush Saga. Now, about a month later, I’ve lost a little over $US230, hours of battery life, and any remaining semblance of dignity. Hello, my name is Ashley Feinberg, and I have a Candy Crush problem.

And as it so happens, it turns out that I’m not even the first. For those blessed few who have yet to play the game, Candy Crush is, for all intents and purposes, free. It costs nothing to download and, in theory, costs nothing to play. In theory. But you know what else seemed harmless in theory? Communism. The reality is far more complex.

In Candy Crush, you’re given five lives, that once lost, each takes 30 minutes to refill. So if you lose all five in quick succession, it’s another two and a half hours before you’re fully replenished. But absentmindedly hit Try Again, and you’re prompted to pay a small fee for an entire set of fresh, new lives. It’s just 99 cents, you tell yourself. You could easily lose that money in loose change doing laundry. What’s the harm? What’s one time? I’m just so close.

But you see, anonymous internet confidant, that one time is all it takes. I had made it through weeks without ever spending a cent on an extra life. Not one cent on Striped & Wrapped candies, extra moves, the precious, venerated Colour Bomb. Nothing. But then one day it happened. I was so close to moving on to the next set of levels; I’d been on Level 66 for nearly a week. I was so. close. And then I caved. I decided to buy the five extra moves offered every time you lose a round. That’s when everything started going downhill.

I became a slave to the unstoppable force of Candy Crushing micropayments. It was so easy. It didn’t even feel like I was spending money. Most of it was spent on new lives when I would get in the zone and couldn’t accept the defeat. But occasionally, like when I found myself audibly cursing the heavens on a crowded subway car over level 79, it was to buy those five more moves. Just five more and I swear I can beat it. Why, I’m pretty sure I hit that “Play On” button and bought those five more lives (the first two times for $US1… then for $US2) about four times before I got to my destination and had to put my phone away. And all for naught — I hadn’t even beaten the level.

Because like a Colour Bomb surrounded by a sea of candy both striped and wrapped, I always thought victory a mere swipe away. And the scariest part is that it didn’t even take up that much time. Just in commuting both to and from work, I would have a good total hour in which I was free to crush candies, totally uninhibited by outside commitments and totally free to drop a good $10 easy. EASY. I was on top of the world. But oh did it ever add up.

Last night, I decided that it was probably a good idea to assess the damage, considering that I’d been playing for nearly a month now and had begun dreaming in bright, virtual candy poison. I hadn’t realised it until right then, but I was actually in a very dark place.

And then the shame hit. I didn’t want to add it up; I wanted to pretend I’d never opened that accursed iTunes account history. But I did. And it totalled about $236. You’re goddamn right I’d like to report a problem.

But no more. That was — I hope — my wakeup call. I’m not one for things like “patience” or “temperance” or “knowing when it’s a good idea to stop ever,” but this has gone too far. I can only hope my public admission is enough to call on my conscience and shame me from ever hitting that seductive, misleading “Play On” button ever again. And if you have yet to touch Candy Crush, please, for your own sake, don’t. Let this be a cautionary tale, and continue living your life, unencumbered by the beckoning call of oh-so-satisfying exploding candy. It’s not worth it.
Thank you for listening to my pathetically sad tale. And please, friends, stay tough — don’t Crush.