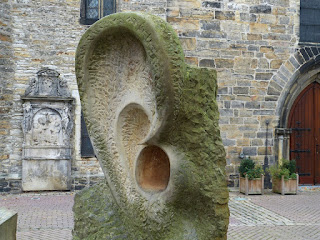 Fun and Weird Facts about the Deaf

Deaf people, and those hearing problems, have a whole culture within themselves. Those who can hear well probably think it's easy -- just learn sign language, right? Well, the truth is that there really is no one universal "sign language" for everyone.


Fast Facts on Various Deaf Languages around the World

It was not until the 1880 Conference of Milan that people organized a way for educating and communicating with the deaf through signing. Some deaf people recall having others slap their wrists when they just didn't get the communication of sign language.

Different sign languages exist in different countries, and those signing within those languages also have various dialects. Those who sign in ASL may only understand other deaf people in the USA and Canada. British people who sign in ASL have only 31 percent of the same signs when visiting America. Then there is a dynamic mix of various signing languages in North American and European countries called Auslan. Plus, did you know that deaf people in Hawaii have their own form of sign language? Then if you happen to vacation in Martha's Vineyard, here's hoping you know the local, 200-year-old Martha's Vineyard Sign Language when coming across deaf yacht owners!

Nowadays, deaf people deserve rights and respect just like everyone else, but it wasn't always so. If you lived in 1000 BC, according to the archaic Talmud law, you would suffer terrible treatment and not even have the right to purchase land. Then between 427 to 347 BC, they say Plato taught that deaf people had only abstract concepts and that they did not have the capability to conceive good ideas and speak like everyone else. Aristotle took it further by assuming only Greek was the world's perfect language. Of course, poor, deaf people didn't speak Greek. Therefore, in his mind, they were all barbarians.

The Catholic and Christian churches, with their already creepy traditions, only made matters worse. In ancient times, they firmly believed "Faith cometh by hearing," written in Romans 10:17. Deaf people continued to receive the outcast treatment. Alexander Graham Bell, inventor of the telephone, actually had both a mother and a wife who were deaf. Imagine the dynamics at family reunions!

What About Getting Everyone Hearing Aids?

Cochlear implants are one of the ways that physicians have found to help those with deaf issues, even young babies. Still, they do come with complications.

Usually, doctors suggest that babies who do not pass the hearing tests get these implants, and many parents are of course willing to try it. However, the sounds that the children hear aren't always exactly crystal clear, and the surgery is a risky one. Among an array of problems that modern implants can cause, it includes the chance of meningitis after the surgery and disrupted nerves, which can lead to a paralyzed face.

For the more than 500,000 deaf people living in the United States, there is a lot about deaf culture that other "hearing" people aren't aware of. Life can be pretty weird and even creepy for those who don't hear properly. This list gives just a small idea of the some of the weird culture and history you may have never heard about!
Posted by Cheeta at 7:17:00 PM