THE COMPARISON BETWEEN NAPOLEON BONAPARTE AND ADOLF HITLER

Who was Napoleon Bonaparte?
Napoleon had a very poor childhood and was an immigrant of France. He later became the most well known dictator of the 19th century.

Who was Adolf Hitler?


Hitler was also a very poor immigrant in Austria when he was younger and also became Europe's most known dictator, but of the 20th century.

WHAT DID THESE MEN DO BEFORE THEY BECAME DICTATORS?
Both Napoleon and Hitler had served in the military before they became political candidates for their own countries.

Adolf Hitler and Napoleon Bonaparte had both wanted to rule the entire world, meaning they both had to conquer Russia. However, both men failed at their attempt to conquer the country.

WHAT DID THESE MEN DESIRE?
Napoleon: I'm going to rule the world!
Hitler: I don't just want Europe. I want the world.

MOSCOW
Napoleon Bonaparte's Downfall in Russia
His army suffered heavily from supply problems and the cold. He thought if he captured Moscow then the Russians would negotiate. Instead the Russians burned Moscow so Napoleon didn't have any anywhere to station his troops through the winter.

Adolf Hitler's Defeat in Russia
Hitler's defeat in Russia resulted in many casualties. His troops were not prepared for Russia's winter, therefore Hitler's army was defeated quite easily in Moscow.

DIFFERENCE BETWEEN THE TWO MEN - (THE JEWS)
Napoleon wanted to persuade the Jews from around the world to live and settle in France. Napoleon didn’t mind having the Jews in France and had no problem with them.

Hitler on the other hand, hated the Jews. He had no desire for them at all in Europe. However by giving the Jews the blame, Hitler created an enemy. He said that all Germany’s problems had been caused by the Jews. Many people believed him.

HOW ARE THESE MEN VIEWED TODAY?
Napoleon, during his glory days, was referred to as a hero and a military genius. Today, surprisingly, he is still viewed as a hero by some of the French and the rest of the world. 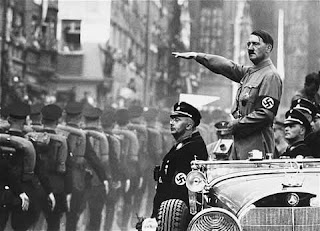 Hitler was seen as a hero to some people during World War II, but later on, all of Europe feared and hated him. Today, he is still seen as the world's worst dictator, who is loathed and hated by everyone.

Comment or add if you have more informations about NAPOLEON BONAPARTE AND ADOLF HITLER.
Posted by Cheeta at 1:06:00 AM