JANE OTTAH WAS EXPELLED FROM UNIVERSITY BECAUSE SHE IS DEAF. Help Jane gets JUSTICE!!! 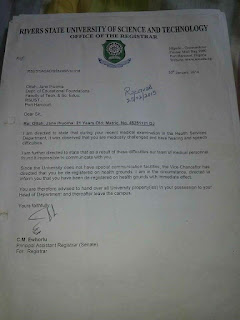 I thought it was a joke when someone said Rivers State University of Science and Technology (RSUST) expelled a student named Jane Ottah on the ground of health (deafness) in 2014 before I came across a letter as evidence from the Rivers State University of Science and Technology. I was shocked as their reason was that there was no special communication facilities (how reasonable is that?). Even if they didn’t have any special communication facilities, isn’t their duty to provide facilities? Isn’t their duty to see what they can do to better a Deaf student who has passed WAEC, UME, Post UME and finally being admitted?


When i entered University of Ibadan in 2004, there were no special communication facilities, it was during the students orientation that I made myself and others known to Professors and lecturers that we are deaf, we can’t flow with lectures without an interpreter and we demanded for an interpreter, the HOD then was Prof. I. A. Nwazuke, he provided/employed five (5) interpreters the next day. That is not all, we have Deaf students who graduated from various departments in Universities in the past, some of them are now Doctors, Lawyers, Nurses, Lecturers and Politicians etc. That is not all, a lot of visual impaired (blind) students have graduated from various universities including Deaf Students.

But still in 2014, which was more advanced with all kind of technologies, Rivers State University of Science and Technology (RSUST) expelled a Deaf student named Jane Ottah, they have scattered her dream, wasted her time and life. The good news is that we, persons with disabilities have taken it up against Rivers State University of Science and Technology (RSUST) for discrimination along with Disability Advocates, Human Activists, SANs and Lawyers. The University must know that we deaf have the right to education (http://wfdeaf.org/our-work/focus-areas/deaf-education). We have taken the matters to the court and the first hearing would be coming up on February 19, 2016 at the Rivers State High Court in PH.
Posted by Cheeta at 12:21:00 PM