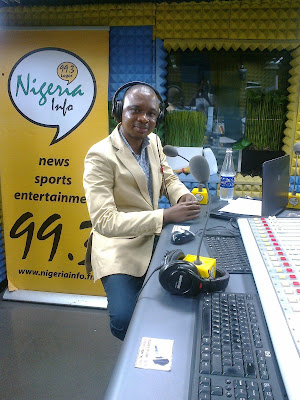 It is my pleasure to introduce you to one of the strong disability advocates. His name is Mr. David O. Anyaele, he is the Executive Director of Center for Citizens with Disabilities and I am a volunteer advocate of his NGO. He has taught me a lot in advocating for Persons with disabilities and he has shown me ways to go and how to fight for the rights of persons with disabilities and today I can gladly say that with the experience I have acquired from him, I am able to fight for the right of persons in one or the other.

As he is celebrating the 17th Anniversary of his limb-loss, let’s join hands to congratulate and celebrate with him for what he has done for the disabled community and the impact he has created for the community too. He is sharing his experience on how he lost his hands to the RUF rebels of Sierra Leone because of his identity as a Nigerian and how it all happened in 1999. Enjoy reading his experience below:

Friends, I’m excited to invite you to join me as I celebrate the 17th Anniversary of my limb-loss. It was this date in 1999 that the RUF rebels of Sierra Leone chopped off my two hands because of my identity as a Nigerian. It was a day everything about me changed. Starting from status, profile, career, vocation, language and identity as well as community changed.
I recall vividly how I walked from the scene of the attack off Shell bus stop, Kissy bye-pass to Connaught Hospital, Freetown. On getting to the hospital, I remembered that I have an Adventist sister from another mother Memunatu Koroma who was then a student nurse at the hospital, I then requested that she should be informed. The moment she learnt about what happened to me she ran to meet me at the hospital. Memuna sacrificed everything to give me all the support I needed till I was evacuated from Freetown. The same thing happened when another Adventist sister from another mother Mrs. Fatumata Kargbo heard about my ordeal she choose to give me family support while in the hospital.

Few weeks later the Nigeria Contingent of ECOMOG medical team led by Gen. Okolo, evacuated me from ECOMOG Clinic to Lungi Airport and thereafter I was flown to Lagos, Nigeria. That day remains the most painful day of my life. I also remembered how I was admitted at the 68th Nigerian Army Reference Hospital Yaba under the care of the then Commandant of the Hospital, Gen. Jonathan Aremu one of the finest Nigerian Military Surgeons. The Nigeria Military took good care of me to the extent that I was receiving bed allowance as a patient.

I also recall the first family member that came to see me. It was my Uncle, Elder Emma Okpechi. He came with his wife, Mrs. Uloma Okpechi. Uloma couldn’t hold her tears as my Uncle asked me what led to the incident? I told him I did nothing, my only crime was my identity as a Nigerian. Right there, he promised to take good care of me. His wife was another angel God used to rehabilitate me. Friends, I must confess to you, blessed is the man whose Uncle married a good wife. Uloma’s character, attitude and support towards my condition were exceptional. She treated me like her blood brother. This woman served me fresh foods everyday throughout my 7 months stay in the hospital without murmur. A sister-in-law like Uloma remains a scarce commodity till this day.

The day my mum came to see me for the first time, as soon as the hospital learnt that she was coming, they prepared the ward so as to control her tears and wailing. But, behold, my mum, Madam Grace had already consoled herself, all she was interested in was to see me breathing. To the glory of God, not only that I was breathing, I was full of energy. I told my mum that nothing spoil, the only thing I needed was just US$50 as soon as I am discharged from the hospital, to enable me start my business again. I assured her that as long as God liveth, I shall bounce back. She believed me, her countenance changed for good.

Behold, seven months later I was discharged from the hospital. I was also confirmed stable by my Consultant Gen. JA Aremu. While I was planning to relocate to Aba, some of the medical personnel at the hospital advised me to stay back in Lagos. I didn’t know why the advise. It was many months later that I came to appreciate the advise. Well, I relocated to Aba, Abia State Nigeria after my discharge from the hospital. It was there that I met the real challenge of living with disability in Nigeria and Aba, Abia State in particular.

Before, I reached Aba the news of my ordeal had spread to the town. Many couldn’t imagine how I was looking. As soon as the news of my arrival filtered town that Senator as I was popularly called by friends, our residence was besieged by people. Among the first callers were friends, neighbors, church members, members of my age grade and others who heard what happened but prefer to come to sympathize with me. There were different versions of what happened to me as narrated by visitors. Suddenly, discrimination, stigma, isolation and other forms of abuse began to step in from people I expected to protect me

These early callers were the first set of people to avoid me. When they sees me coming or passing they will face the other side, even when I call their name to exchange greetings, they pretend as if they are not hearing me. I could recall one day, I was passing, I saw my friends from afar drinking in a beer parlour, they never know that I was watching them, one of them requested from the other if he has lose change, that I am coming so as to give it to me. Chai! Another incident that pained me so much was the day a “good” friend of mine back then was passing very close to our residence, I watched him turning his face to the other side so as to not to see me, without him knowing that I was at the other side of the balcony watching him from up stairs.

The news then was that nothing good will come out of me. I was seen as a confirmed street beggar, who must depend on other people to feed. In fact, it got to the stage that family members were afraid of me coming around them. Their fear stems from who will feed me, if I want to eat? Who will help me if I want to use the toilet? Who will do this and that for me if the need arises? As such, very few individuals relates with me. Among those who gets close to me, are individuals who are afraid that something might happened that may lead to one form of complication or the other, so they relate with me suspiciously. As I was meditating on these situations I remembered what the medical personnel at the Military Hospital Yaba told me, not to relocate to Aba until I fix artificial hands. It was such a shameful but devastating condition.

Please don’t forget that I am still a work in progress. It is not by my power or connection or status, but by God’s mercy.

Friends, God is still in the business of helping those that are down to come up. I don’t care how bad your situation or condition may look, God can change it today, this hour, now now, now for better. I pray God to help anyone under the influence of this article that is going through one difficulty or the other, in Jesus name. Amen. God did it for me and I strongly believed that He will do it for you, for all of my help cometh from the Lord who made heaven and earth.